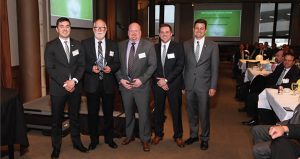 According to Mann+Hummel, the award honours the supplier who has been “most exemplary” in their performance, support, and dedication. “Wittmann Battenfeld was noted in particular for its stellar response time, its transparency, its conviction towards resolving any issues, and the general quality of its injection molding machines and robots,” Mann+Hummel said.

Torrington, Conn.-based Wittmann Battenfeld was also a winner of the Mann+Hummel “Supplier of the Year” award in 2013 and 2014.

Mann+Hummel has been using Battenfeld injection molding machines in North America since 1998/99 for molding automotive intake manifolds and numerous other parts. There have been 15 new Wittmann Battenfeld machines purchased by Mann+Hummel since 2010, as well as numerous Wittmann robots ranging from W711 up to W843 models.

“We see this award as one of the higher honors we as a company can achieve”, said Wittmann Battenfeld USA president David Preusse. “When we have our customers making note of and honoring our success and the difference that our effort makes, it really makes us proud of the work we’ve done.”