Approximately 12,305 robots were sold in Q2 2022, with the majority to automotive companies.

For the third-straight quarter, robot sales in North America hit a record high, driven by a resurgence in sales to automotive companies and an ongoing need to manage increasing demand to automate logistics for e-commerce.

According to the Association for Advancing Automation (A3), of the 12,305 robots sold in Q2 2022, 59 per cent of the orders came from the automotive industry with the remaining orders from non-automotive companies largely in the food and consumer goods industry, which saw a 13 per cent increase in unit orders over the same period, April through June, in 2021. 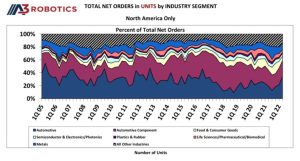 “A record fourth quarter in 2021 resulted in the strongest year ever for North American robot sales, with 39,708 units sold at a value of $2 billion, and 2022 is on pace for another record year,” said Alex Shikany, vice president, membership and business intelligence, A3. “The larger trend towards robots being used to benefit more companies in North America continues.”