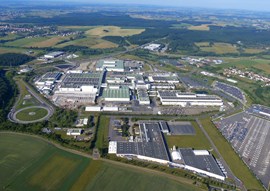 Ineos Automotive, a subsidiary of UK-based chemical supplier Ineos, has acquired the manufacturing facility at Hambach, France from Mercedes-Benz and will start to build its Grenadier 4×4 there in late 2021.

In a Dec. 8 news release, Ineos officials described the Hambach facility as being “ideal” for production of the Grenadier. “One of Europe’s most modern automotive manufacturing sites, it is home to a highly experienced and capable workforce, has an excellent track record amongst Mercedes plants for the quality of its output, and recently benefited from a major investment to enable the production of larger vehicles,” Ineos said. “Additionally, the site’s location on the French-German border, only 200 km from Stuttgart, gives excellent access to supply chains, automotive talent, and target markets.”

Under the terms of the acquisition, Mercedes-Benz will contract Ineos to continue to produce the smart EQ fortwo and some Mercedes-Benz components at Hambach. When combined with Ineos’ plans for the Grenadier, this translates into some 1,300 jobs at Hambach, including commitments to onsite suppliers, Ineos said.

“Manufacturing at Hambach ensures that Ineos remains on track to meet its plans to deliver the Grenadier to customers in early 2022,” Ineos’ statement said.

The agreement will also preserve “many jobs” that would otherwise have been lost, Ineos said.