The upgrade and retooling of the plants is a further step towards the automaker's goal of increased vehicle electrification. 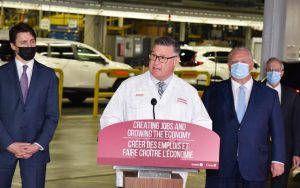 In a move that marks what it calls “an important step” towards vehicle electrification, Honda of Canada Mfg. (HCM) has announced plans to upgrade and retool its plants in Alliston, Ontario.

The automaker is investing nearly $1.4 billion in the project, and is partnering with both the governments of Canada and Ontario, with each level of government providing an equal and conditional contribution of $131.6 million.

In a March 16 news release, HCM officials said that the plants “will implement new and innovative technologies, processes, supply chain, and vehicle research and development programs,” as a part of HCM’s goal to reach zero emissions by 2040.

“Today’s announcement marks an important step in the company’s pathway to electrification and will see HCM become the North America Lead Plant for the all-new 2023 CR-V Hybrid crossover,” the release said. “This will bring Honda’s total Canadian facilities investments to more than $6.5 billion since 1986, when Honda became the first Japanese auto maker to build a Canadian manufacturing facility.”

The investments will also help towards a range of enhanced job training initiatives and expanded inclusive hiring practices, HCM said, as well as research and development programs aimed at reducing environmental impacts of vehicle production.