Results of the new 17th annual North American Automotive OEM-Supplier Working Relations Index study revealed that GM now ranks ahead of Fiat-Chrysler US, Ford and Nissan, which is now in last place.

Results of the new 17th annual North American Automotive OEM-Supplier Working Relations Index study revealed that GM now ranks ahead of Fiat-Chrysler US, Ford and Nissan, which is now in last place. Nissan’s supplier relations have dropped for the third straight year since 2014, when it was in third place. Toyota and Honda remain first and second, respectively.

Just two years ago, GM’s supplier relations were ranked the worst of six automakers in the annual study. But new purchasing leadership at the Detroit-based automaker is being attributed as a primary reason that Tier 1 auto suppliers are reporting improved dealings with the company. “[GM] now has solid leadership at the top in global purchasing and supply chain who are committed to developing better relations,” the survey said. 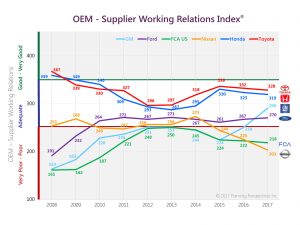 The Working Relations Index which tracks six automakers relations with their suppliers, shows a dramatic shift in rankings for General Motors, which moved up to third place, and Nissan, which has fallen to last place. Ford dropped to fourth, FCA US is in fifth, while Toyota and Honda remain first and second, respectively. (PRNewsfoto/Planning Perspectives, Inc.)

Ford, in spite of a slight improvement this year, is now ranked fourth. Fiat-Chrysler continues its downward slide, but is in fifth place because of Nissan’s poor performance. While Toyota and Honda remain in first and second place, respectively, they continue their “slow downward slide in the annual rankings,” said the study’s summary.

“GM’s turnaround in supplier relations is remarkable,” said study author John W. Henke, president of Planning Perspectives Inc. “The reason for its dramatic improvement – and Nissan’s fall – is easy to understand. GM has improved across the board in all five of the key areas that comprise the Working Relations Index ranking, and Nissan has dropped in all five. While both companies have had significant cost-cutting programs in place for the last two years, their programs have had opposite results in terms of supplier relations. Nissan’s adversarial approach to reducing cost has greatly disrupted relations with its suppliers and it is safe to say that it has cost them tens of millions of dollars in supplier contribution to profits.”

According to Nissan, however, the survey results did not match its own findings. “These study results do not reflect our experience of the technical or commercial relationships that we have with our suppliers, who have made significant contributions to Nissan’s growth in North America,” Nissan said in a statement.