Recently, the Chinese plastics specialist Kangde Composite Co., Ltd. signed a contract for two fully automated HP-RTM plants for the manufacture of carbon-fiber-reinforced plastic components for the automotive industry. This is already the second major order for state-of-the-art production lines for lightweight components from China within a short period of time. In April, the Chinese-American joint venture CSP Victall ordered a production line for the manufacture of long-fiber-reinforced plastic components.

Both HP-RTM (high-pressure resin transfer molding) plants are used to produce parts such as class A-compliant exterior components using the new surface RTM method. The core of the delivery is two DCL upstroke presses with pressing forces of 3600 and 2500 tons. The scope of supply for the two presses includes dosing equipment for epoxy resin, polyurethane resin and primer for the surface RTM. Both fully automated lines are also equipped with a preform destacking station, cooling racks and a discharge conveyor, as well as loading, unloading and cleaning robots with the associated gripper change stations.

In the surface RTM procedure, co-developed by Germany-based machinery supplier Dieffenbacher, carbon components with surfaces that can be painted directly are manufactured without any manual reworking. The first step in this manufacturing process is to press a conventional RTM component. Next, the press is opened a small amount and a primer is injected to compensate for any sink marks or surface imperfections. The result is premium class-A components produced in only one cycle.

The parent company of Kangde Composite, the Beijing Kangde Investment Group, is the largest Chinese manufacturer of laminating films and aims to manufacture state-of-the-art lightweight components made from carbon in the future. The Chinese government wants to put five million electric cars on the streets by 2020. According to a study by market research firm McKinsey, the People’s Republic is now the second most important manufacturer of electric vehicles after Japan. 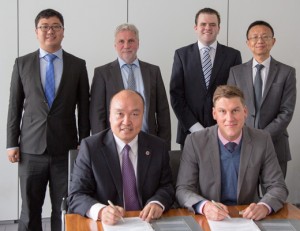 The partners at the signing of the contract for two fully automated HP-RTM lines.