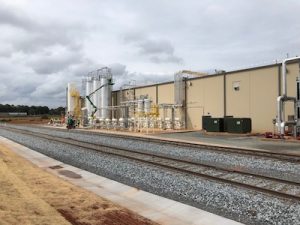 Chemical supplier Borealis AG has announced that its new compounding plant in Taylorsville, North Carolina, has come on stream during Q1 2019 as planned, with the inauguration of the facility scheduled for May 16.

With dedicated production lines for thermoplastic olefin (TPO) and short glass fibre (SGF) reinforced compounds, the plant is located in the southeast of the U.S. in a bid to meet the growing needs of automakers and Tier 1 customers in the region for advanced PP solutions, while adding another 30,000 tonnes per year to the company’s global PP compounding capacity.

The 50,000-square-foot facility, with rail siding in place, offers further expansion possibilities to meet the growing demand of customers.

“With the commercial and product development personnel well out of the starting blocks, our North American automotive team is set to drive the further growth of our automotive business in North America,” Lucrèce Foufopolous, Borealis’ executive vice president of polyolefins, said in a statement. “Following the plant’s mechanical completion in December, first samples were shipped in February, and several projects with leading North American and European OEMs have already been secured.”

Foufopolous also said that the new plant is an “important addition to the global network” of Borealis and affiliate Borouge’s established compounding plants in Europe, China, and Brazil. Among the first products manufactured at the plant, are automotive interior and exterior materials approved and listed by major automotive customers, including Daimler and Volkswagen Group.

Borealis is one of Europe’s largest producers of polyethylene and polypropylene and is headquartered in Vienna, Austria.